One of the things that I’ve been slowly starting to do again is add some of the so-called bad foods back to my diet, foods that I stopped eating over the years because they were just too caloric or just too damn bad for ya (and by you I mean me). Well mostly it was that but also it was another Tokyo dinner night and the hubs chose, what else? Fried chicken.

Back in my meat eating days I was known to nosh on a piece of fried chicken or two but combined with the fact that I’m not a fan of deep frying because it’s time intensive and a waste of food unless you deep fry food on a regular basis, which we do not. So this was a nice challenge from a few different angles and the end product was impressive, delicious and not quite as caloric as I expected going into this vegan dinner.

Since the whole chicken fried tofu part of the meal required a few steps, I kept this a simple vegan dinner inspired by one of my favorite TV dinners as a kid.

Let’s start with the soya since it took the most amount of time. I used the dehydrated stuff (Texture Vegetable Protein, aka TVP) which means you need to soak/boil it in hot liquid, and since I used the biggest pieces they have it took about 15 minutes. Then you have to let them sit for at least fifteen minutes to get some of the water out, or else you’ll have a big fat mess when you start breading and frying. Yeah, see? Time intensive.

Once the soya pieces are as dry as they’re gonna get, you can bread them. I used a flour/Panko mixture that I seasoned with salt, pepper, garlic granules, smoky paprika, ground cumin and dry oregano. Blend and coat, then add to a deep skillet. I only shallow fried them to get a good crisp going and then I transferred them to the oven to crisp-ify even more! 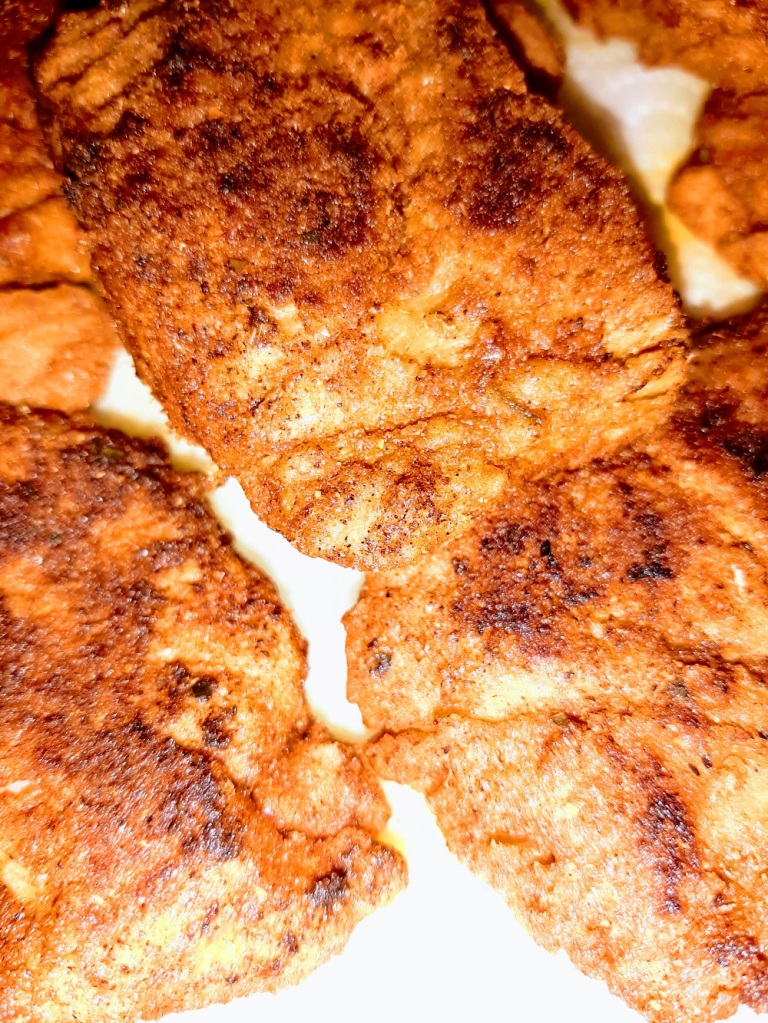 Since this is soya and it is already done, don’t get too carried away during the cooking process, just cook it until you get the level of crispiness you’re looking for.

To keep things simple, I added oven fries and some very sweet Spanish corn on the cob to complete the meal.

Sorry to gloat but let’s just take a moment to appreciate the fine cook on this soya. It’s a skill that one, apparently, does not forget over time. I don’t fry or deep fry food often but it’s nice to know that I’ve still got it! 😉

When in doubt about how to eat healthy and vegan without depriving yourself, be smart. Be grown up. Fried tofu isn’t healthy but baking the fries and adding vegetables means you’re being as healthy as this meal allows. Besides, a small indulgence here and there keeps the big, diet-destroying indulgences at bay.

What’s your favorite trick for eating what you want without going overboard?