As you’ve probably learned by now, I am a HUGE fan of Asian cuisine. I love it all–Thai, Vietnamese, Chinese, Japanese, Szechuan–and I’m not afraid to change it up, experiment or vegan-ize. One of the dishes I’ve been a little terrified of trying was kimchi, for obvious reasons. The idea of fermenting and all that just seemed really daunting.

But it turns out that I was just watching and reading really, super, incredibly complicated recipes. Then I discovered the funny, adorable and skillful teacher that is Maangchi, and I’ve finally done it…made my own kimchi!

Now I could go on and on and on about the benefits of eating kimchi or other fermented vegetables, starting with good gut bacteria that helps keep you healthy. It also lowers cholesterol, it is packed with antioxidants which can boost your immune system and slow down the aging process. On top of all that it is spicy and crunchy and delicious. 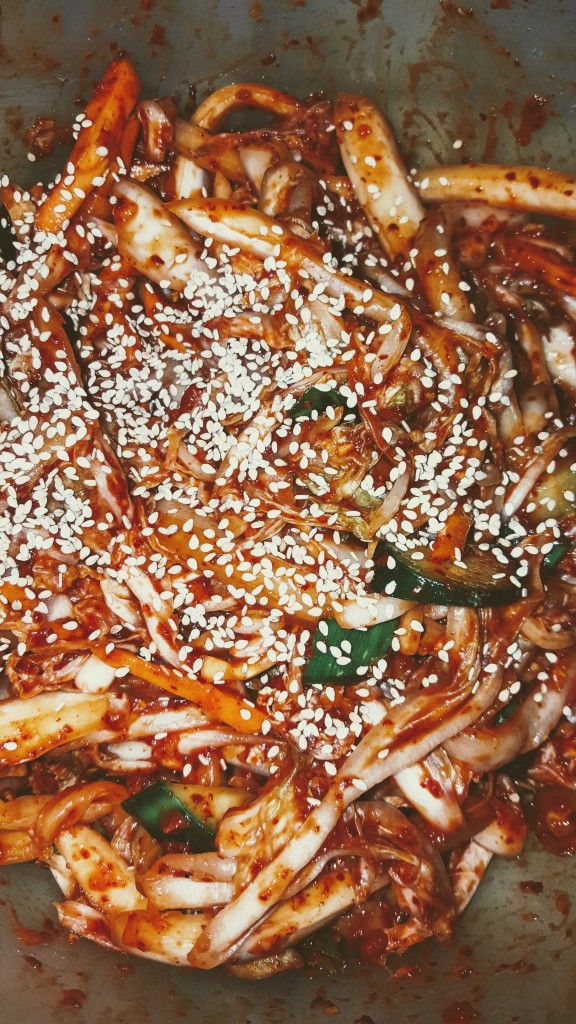 This is a simple kimchi recipe but that doesn’t mean that it’s a simple recipe, so I’ll walk you through each step the same way I went through it!

The first step is to cut and core 1 pound of Napa cabbage. I just bought a really big one and cut it into quarters, using the rest to make slaw for other dishes. In a large bowl combined 1/2 cup of water and 1 tbsp of salt and toss a few times. Set it aside for 30 minutes, mixing it with your hands every 10 minutes.

While you’re waiting the 30 minutes, you can chop vegetables and get the “anchovy” paste going.

I stared with the veggies because I’m pretty quick & handy with a knife. I cut half a large carrot into slices and then matchsticks, and then did the same with the daikon, cucumber and scallions. Set aside in a bowl for later.

Now for the paste. Clearly we won’t be using anchovies so I used a homemade mixture of my own creation to get that salty, bitter taste produced by the tiny fish. You’ll need Worcestershire & soy sauce (3 tbsp. total), capers, glutinous flour and 1/2 cup of water.

Mix those ingredients together in a pot over medium heat until it is reduced to a thick paste.

Add in 1/3 cup of chili flakes, 1 tsp. coconut sugar to the paste mixture and set aside until it’s cool. Just a note that 1/3 cup of Korean chili flakes produces A LOT of heat. For me the spice level was a 7 or 8 and I LOVE spice. For the Hubs, he added vegan yogurt because it was that spicy. 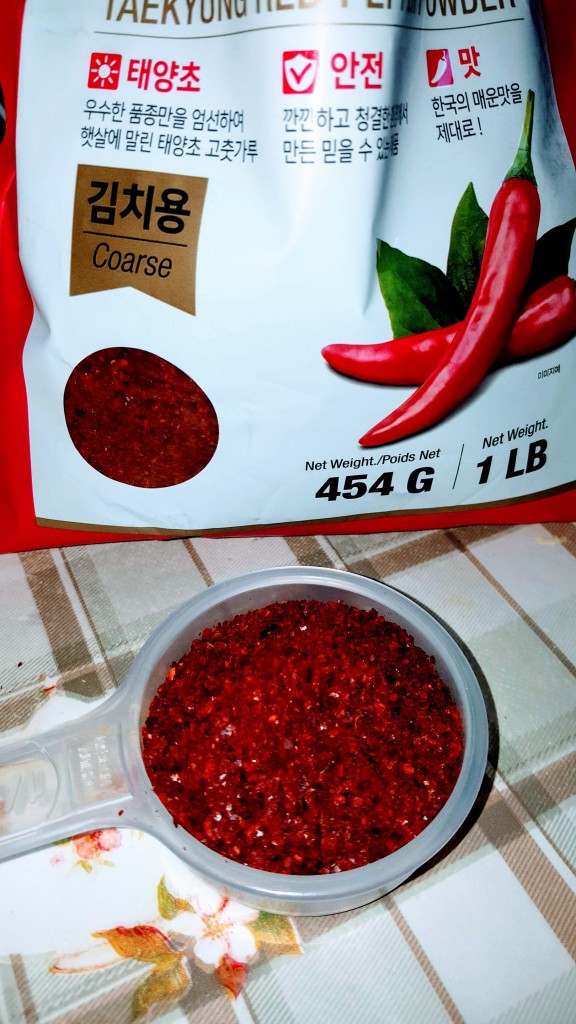 An amazing purchase from Amazon! These flakes are sweet and flavorful and they pack an incredible punch! 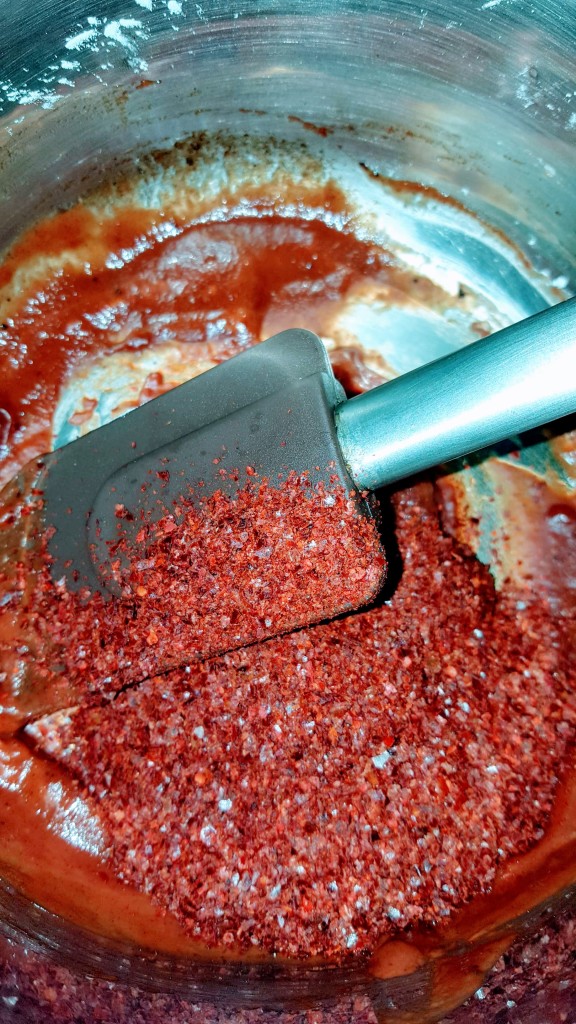 Take 3 garlic cloves, 1 medium onion and 1 tbsp. of ginger and mix in food processor until blended, then stir into chili flake mixture.

Take a moment to rinse & drain your Napa cabbage when the 30 minutes is up and set aside.

Now, grab your gloves and get ready to toss the Napa and veggies with this yummy chili sauce! You’ll have to do it a minute or two, maybe more, to get it all good and coated. Then put it in a serving dish and garnish with sesame seeds (optional but yummy!). 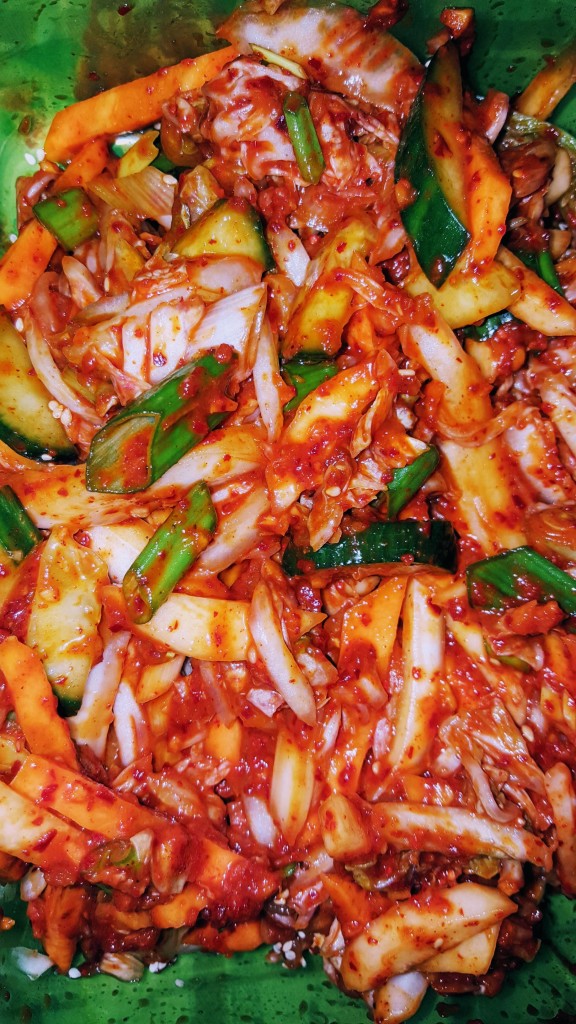 If you need to add more seasoning, I recommend staring with sea salt, lime juice or rice vinegar until you find just the right blend to please your palate.

This kept in the fridge for about 3 days. I’m not sure if it would have lasted more because we ate it. We ate it like it was going out of style because it was just that good.

Got any kimchi hacks or advice? Leave’em in the comments below!