So last week the Hubs and I decided to do another “thing”. A few weeks ago we had a soup themed week where we each cooked a variety of soups throughout the week. Another time it was sandwiches. This past week it was beans.

I know what you’re probably thinking. “Beans, gross.” If that’s what you’re thinking then you are wrong. It was a magical week of delicious food, including the Cajun beans & rice from earlier in the week.

But I will admit that maybe this is a way to cheat the bean thing, but since the English have no qualms about having beans for breakfast it worked in my favor. Cos had been asking for a few weeks now for me to make a vegan breakfast fry up so I set out to exploring different ways to get the sausage component done without wasting an obscene amount of time. I watched a few dozen videos on making vegan sausage when I came up on the Vegan But Lazy channel on YouTube. It was fast and easy, and I am happy to report created a very good sausage-like texture without the gross greasy taste. 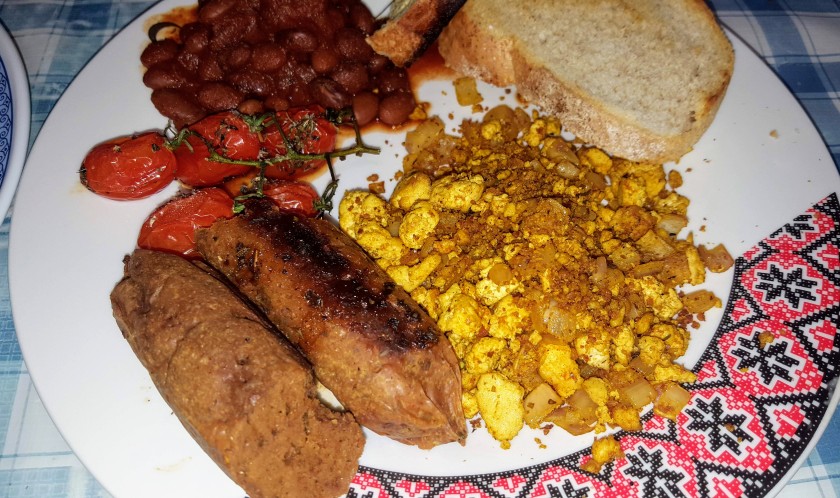 The first thing you’ll notice is that this plate looks a little underwhelming compared to most English breakfast plates making the rounds on the internet, and that’s on purpose. I wanted the fry up without the eleven hundred calories that typically come along with it. So I kept it simple with:

We’ll start with the sausage since it does require the most prep time. Get the original recipe here. You’ll need some vital wheat gluten (seitan), chickpea flour or nutritional yeast, herbs & seasoning, olive oil. That’s it. Mix up the ingredients and form sausage shapes and roll into aluminum foil. Simmer for 45 minutes. I followed the Cajun & Italian recipes to the letter, cut them in half and we each had half of one. They were mad delicious! 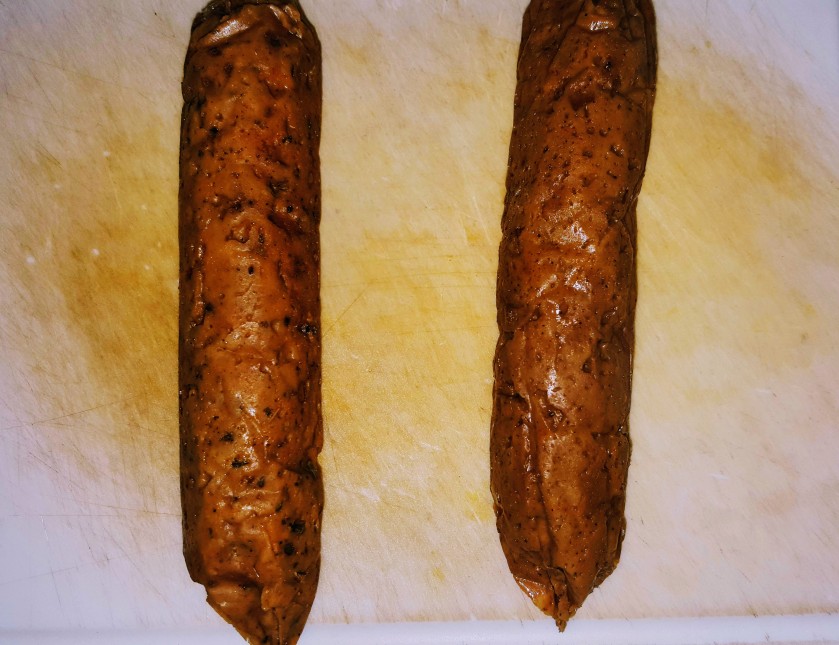 They aren’t the prettiest, but neither are the ones made with animal flesh, right? But this was what they looked like fresh from nearly an hour of steaming. I brushed them with oil and put them on a sheet pan with the tomatoes so they could crisp up in the oven. 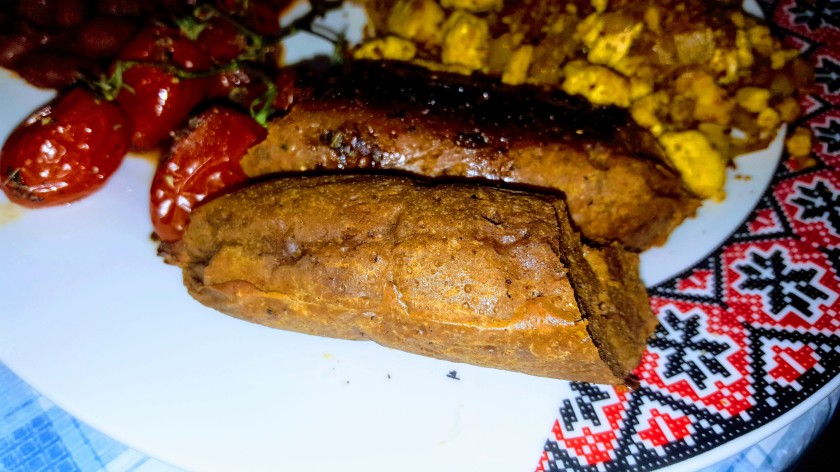 The rest of the meal is easy peasy. Crush a brick of firm tofu and season as you wish. Get my smoky tofu crumble recipe here or check out his recipe here.

The sausages and the tomatoes will cook at the same time and you can toss the buttered bread into the oven during the last 3 to 5 minutes of cooking, or use a toaster if you have one.

You can’t really have a proper English breakfast–vegan or otherwise–without a proper beer, can you?

I can’t but as you can see, I completely forgot to get a good photo of them, so enjoy what you can see. We shared an oat stout and a Scottish stout, maybe not very English but very delicious. 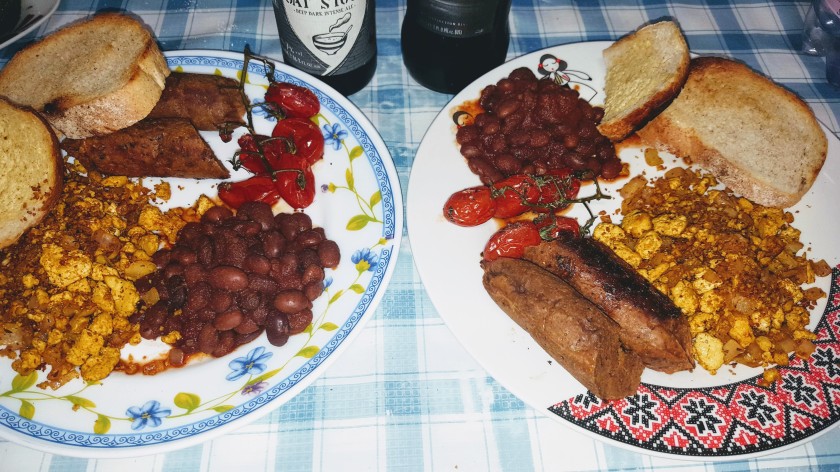 Breakfast for dinner is a time honored tradition in many American families. Most mornings everyone is too busy to sit down and eat a real breakfast and even now, I work from home but breakfast is rarely a priority for me beyond coffee and vitamins. But then there comes a craving for breakfast foods. Pancakes. Waffles. Omelets. Hash browns.

It makes me think of high school and Friday nights at Denny’s after football games, or trips to IHOP when I’d come home to visit in college. Now it’s just something I occasionally feel like having and my sweet, sweet husband did me a HUGE solid by making it for me. I totally appreciated it and now I’m sharing it with you! 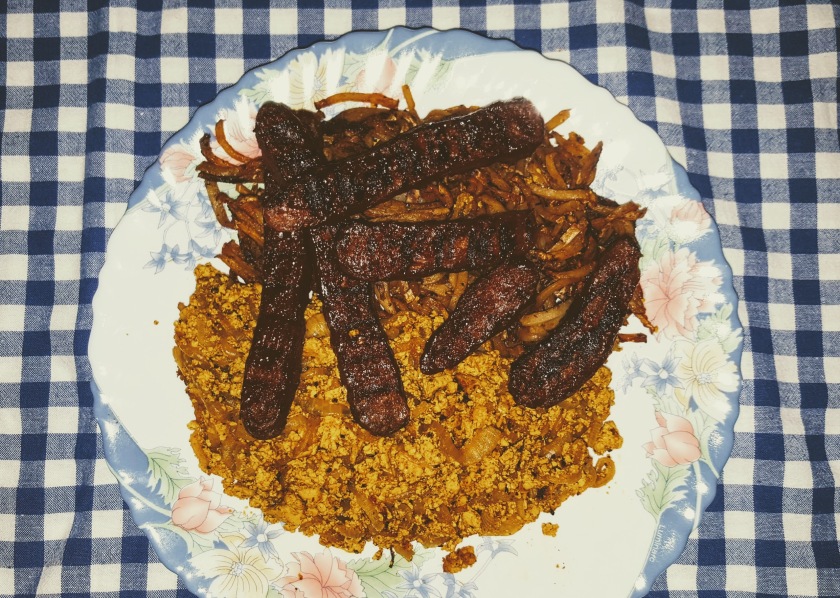 To top it all off, the night he made this ended up being a very late night for us. We were visiting friends until much later than anticipated, luckily he’d precooked everything but the tofu scramble. Let me tell you, there is nothing better than something delicious and nostalgic when you’re super hungry.

So the menu was tofu scramble, hash brown potatoes and barbecue ribs. I know what you’re thinking about the ribs, but this is the last piece of leftover seitan steak, re-purposed into “ribs” because, you know, breakfast ribs are a thing. Right? 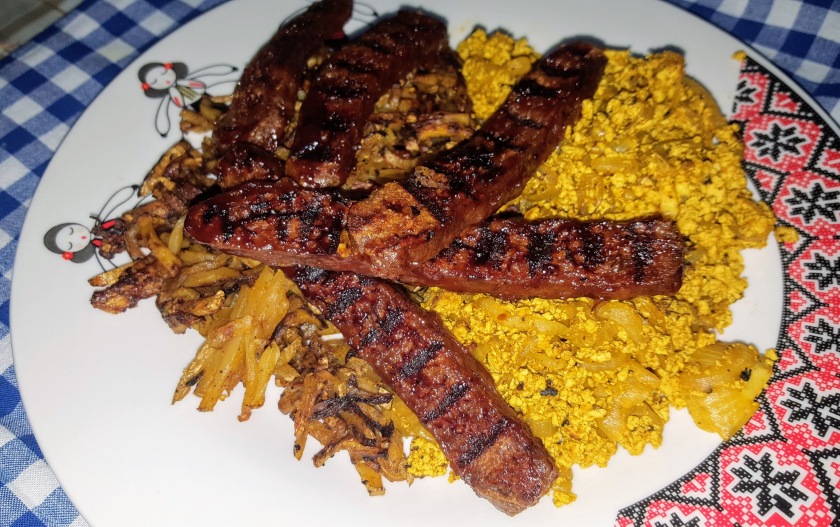 That tofu scramble is firm tofu, hand crumbled and seasoned with a lot of herbs & spices to make it taste yummy. Almond milk and nutritional flakes are a key ingredient in any tofu scramble, in my opinion so start there and work your way forward.

The potatoes were done with the help of a mandolin and made extra fantastic by smoky paprika and garlic granules, plus sea salt.

And the ribs, well that was a combination of barbecue sauce (recipe here) and Jameson. First cook it on a stove top griddle or a grill, but he brushed more sauce on and popped them into the oven for about 20 minutes. It was delicious and contained a more than acceptable amount of calories. 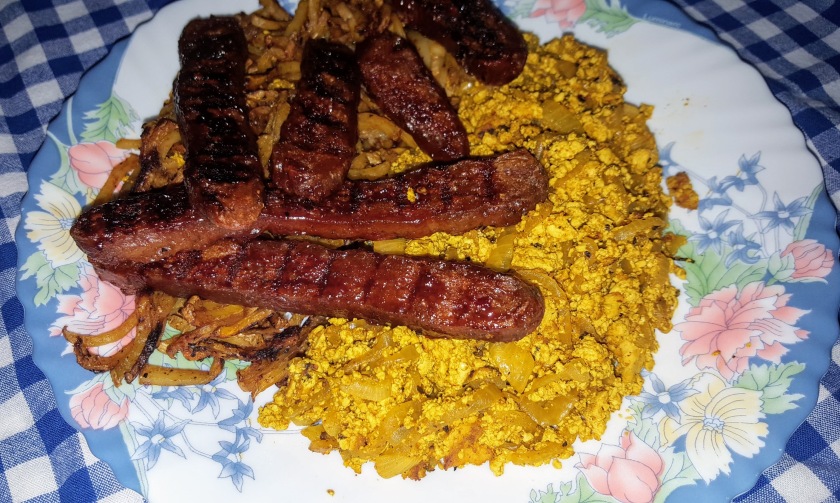 And since it was late night, it felt more than a little proper to enjoy a nice cold Kentish Ale with it. 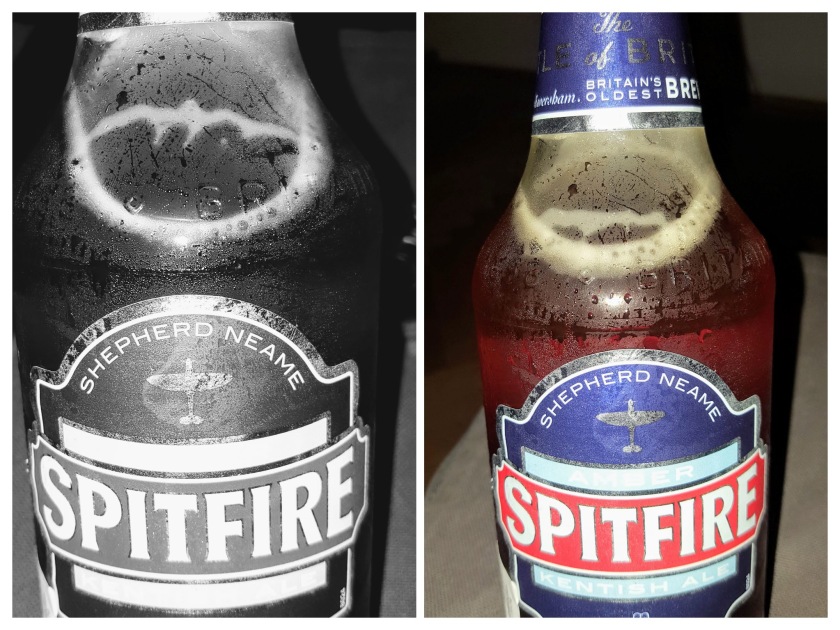 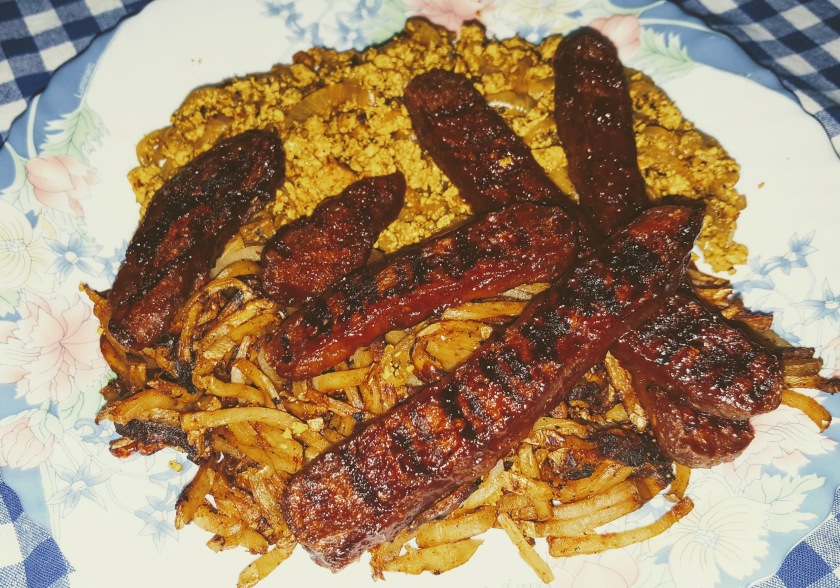