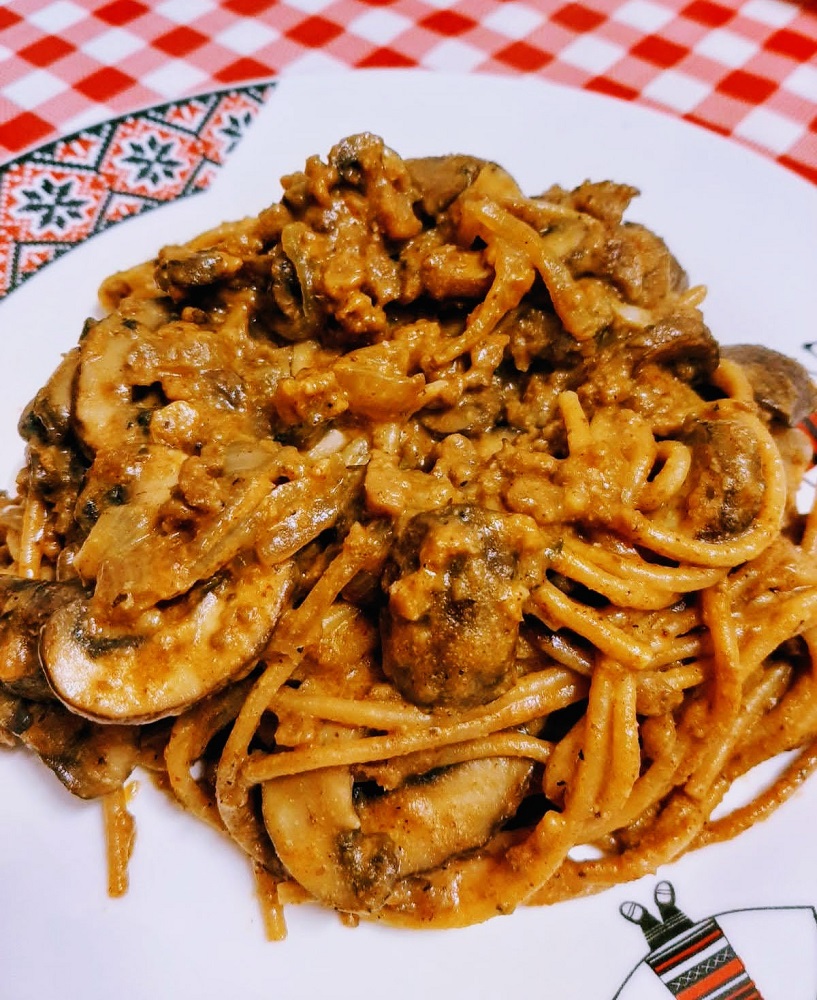 Whenever I think of tetrazzini, instantly I’m propelled back to the 90’s when my former step mother would make this dish with leftover dry chicken (or turkey if it was just after Thanksgiving) and mushrooms and some cream-type style. It wasn’t my favorite dish back then, other than the fact, you know, that pasta is delicious.

In fact, I’d argue that pasta is a lot like pizza. Even cold and a day old, it’s pretty damn good.

So why on earth did I request mushroom tetrazzini when it was my night to choose what we would have for dinner?

But here we are, or rather, there we were.

Just so we’re clear, this is a bastardized version of whatever ‘traditional’ tetrazzini is supposed to be, but it’s close enough in my opinion that I’m called it a vegan mushroom tetrazzini, whether you like it or not.

Check the ingredients out and see if you agree.

If you plan to pop the dish in the oven to finish it off, preheat the oven now.

In an oven safe dish, or a skillet, cook mushrooms until the water is gone and they start to crisp, about 15 minutes.

Next, add onions and vegan mince and cook for about 5 minutes until they turn translucent and then you’ll want to add the garlic.

Don’t forget to season with salt & pepper as you go.

When the garlic becomes fragrant, add vegan butter until it melts and then add flour. You’ll have a nice roux going even though it’ll look sticky and weird. Cook for about 2 minutes and then add broth and/or almond milk, or any other plant milk that you prefer, and nutritional yeast.

Bring the liquid to a boil and reduce to a simmer while pasta cooks. When the pasta is done, toss in the creamy sauce and serve. If you plan to bake it off, doing it now.

If you plan to bake vegan mushroom tetrazzini, consider adding bread crumbs to the top for a nice bit of crunch at the end.

Garnish your tetrazzini with parsley

Add peas for a nice pop of color