My noodle addiction strikes again! One night while zoning out and binge watching YouTube videos I came across a recipe for Dan Dan noodles and immediately thought to myself, I have to have it. Soon!

Which meant the next time I hit the market, I grabbed everything I would need for this spicy Chinese Sichuan dish, with a few alterations of course, and prepared to work my magic. 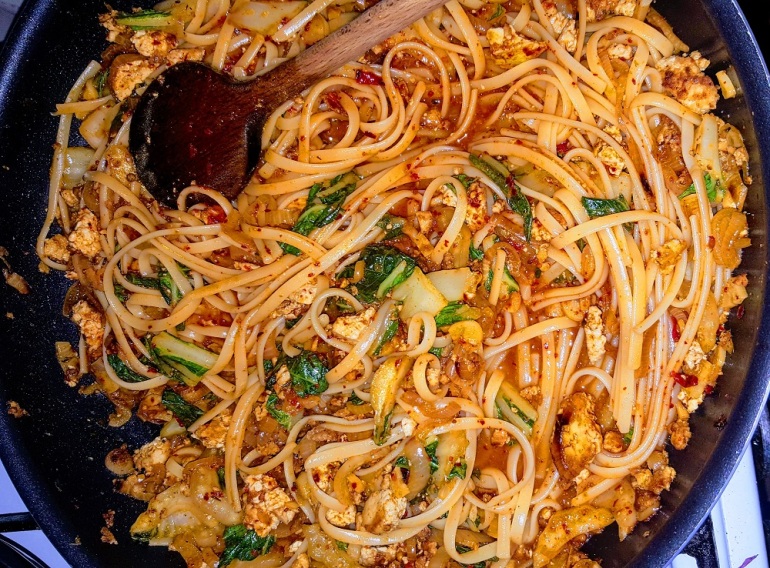 I would have loved to find a better noodle than the Bavete pasta I ended up using, but the only supermarket in town that has a wide selection of Asian noodles had…none. Okay well not none, but there was a basic vermicelli noodle and glass noodles, which have their place and time. It just wasn’t this day and with this vegan Dandan dish.

I replaced the ground meat with crumbled tofu and instead of buying the slightly greasier already ground up version, I pressed a brick of firm tofu and then crumbled it with my fingers. I added a bunch of seasoning to the crumbled tofu including salt & pepper, piri piri powder, ginger, lemongrass powder, Worcestershire and Korean chili flakes, many of which I also used in the sauce. To cook the tofu I used a tablespoon of coconut oil, adding it one teaspoon at a time as needed.

Once it started to brown around the edges, it was time to add the sliced onions, garlic (8 or 9 cloves), ginger and the white stems from some bok choy.

Once the tougher vegetables cooked until they started to crisp around the edges, I tossed in the chopped bok choy greens until they began to wilt. And then I added the delicious sauce which I had to make and tweak so if it’s not perfect, oh well.

I used soy sauce, ground ginger, coconut sugar, tomato paste, gochugaru, Sriracha, grated garlic, water and cornstarch for the sauce. I added a bit more water once the sauce was in the pan just to be sure everything was coated once it was all in the pan together.

In between all this, I worked on a quick garnish and slaw.

This is just about 20 grams of peanuts chopped, a half a scallion sliced on a bias and a few drops of rice wine vinegar to go right on top of your DanDan noodles.

And because this is a pretty spicy dish, at least when I make it, I whipped up a quick slaw to help cool things down for my husband. Not only was it incredibly delicious, but he REALLY appreciated the coolant.

I sliced half a small cucumber on a bias and then halved them lengthwise, sliced a Pink Lady apple, the rest of the scallion from the garnish and about 80 grams of green cabbage. Tossed it with vegan yogurt, cumin, lemon juice and mint and that was it.

Eat up the heat and cool it down with the slaw. It made for a very delicious vegan noodle dish that I will definitely make again and probably tweak about a hundred times until I’m completely satisfied. 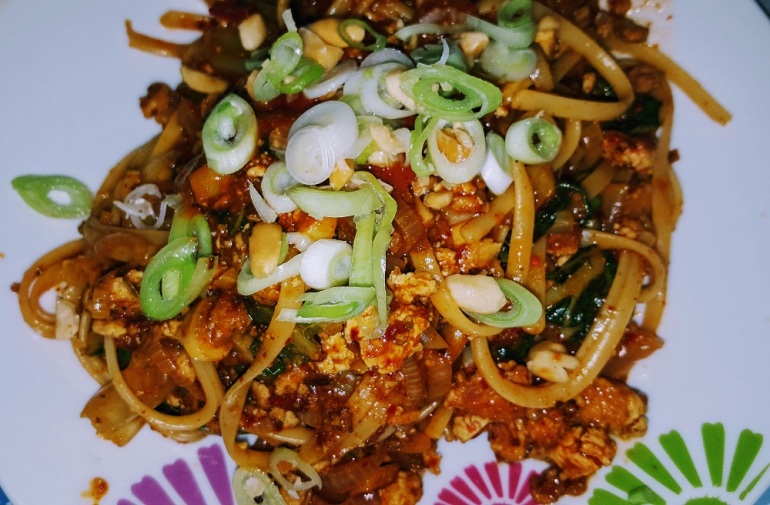