As you probably noticed, I missed yesterday’s post and the reason is because I have been incredibly busy moving from Germany to Romania. Moving always sucks but driving across four countries in the span of 48 hours is more than a task, it is a complete and total THING! I thought packing and hauling boxes would be the hardest part but endless hours in the car behind the movers was a bit of an ordeal.

On the upside, there were some really beautiful sights along the way. Once we made it out of  Germany, Austria was next and that place is magnificent. Back in 2015 I spent a week in Stubai skiing with friends and it was gorgeous but winter so a wholly different type of beauty. This time there was endless seas of greenery. Trees of all stripes growing together, some in that transformative state indicating autumn is well on her way with leaves gold and green and red, not to mention my favorite orange leaves.

We stopped at a little roadside rest area and the sight was magnificent. After hours and hours of trees, which were beautiful, I came upon the most delightful little scene…

Yep, four cows just chilling on the hillside and totally ignoring the view of the mountains and lake beside them. Apparently they were so jaded they didn’t feel the need to enjoy it the way I did. Though maybe the sun had something to do with it. 😀

As you can see I had no problem at all with the view. After snapping a few photos with the hubs, we went for a long walk enjoying the sun glinting off the water.

And that…was Austria. A few hours of it. 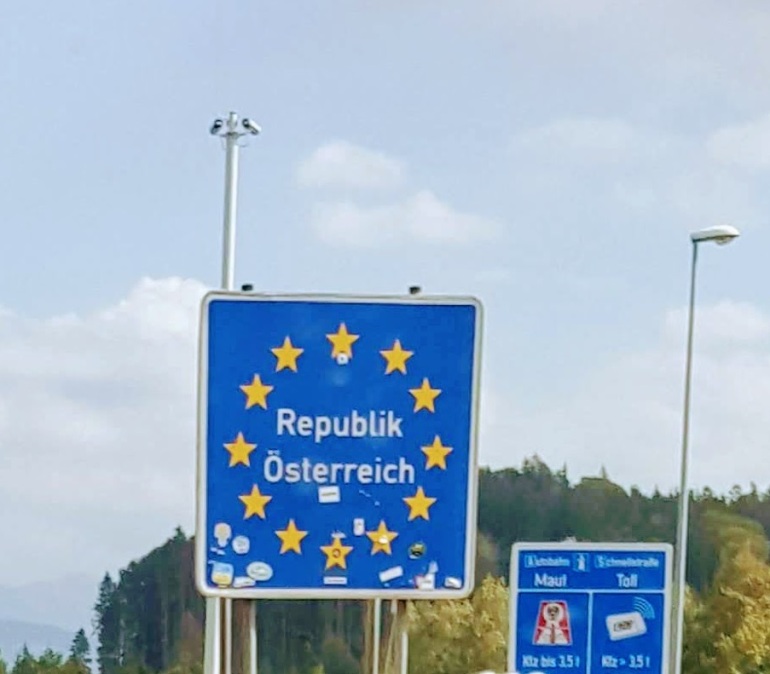 Then we spent about 8 hours in Hungary but most of it was spent asleep in a funky little place called Hotel Paprika.

It was as you might guess, a rustic style hotel but it was way snazzier than I was expecting. The rooms were big and spacious and even though it was my first time in Hungary AND my first time in a European hotel where I couldn’t find an episode of Law & Order on the hotel TV, it was pretty cool. What I did find was the movie Hitman: Agent 47 in Hungarian which was…odd. Unlike most languages I’ve encountered so far there was no way possible to pick up a word here or there, even while watching something I’d seen before. Let’s just say it’s a language I’m glad I don’t have to learn because I’m pretty sure I never would.

Even thought we didn’t spend much time in Hungary we did go down to the hotel restaurant, Csarda Paprika. Unfortunately they had less than zero options for the vegan eater. There was page after page of meat and when there was no meat, there was cheese. So other than a really good beer, Sopoka Demon, we ate steamed vegetables, croquettes and mushroom rice. The mushrooms were canned so yuck but the highlight was Hungarian paprika. Spicy and smoky and delicious.

There was this weird toy for kids and it was so creepy I had to capture it for posterity!

Three hundred and fifty kilometers later and we were in Romania.

Our first stop was at a nice restaurant that was all old school Romanian, complete with old school music which was pretty enjoyable. But again there were no vegan options beyond salad and fries. Not even a vegetable Ciorbă (soup) to speak of. But there was beer. It was–allegedly–a dark beer. It wasn’t but it also wasn’t all that bad.

My husband told me a fun story about the guy on the glass. Apparently he’s a literary figure from his hometown but I haven’t verified the story so if and when I do, I’ll happily share it with you!

After all the trouble finding places to eat, you can imagine how happy I was that I had the foresight to pack some vegan deli sandwiches for the long drive, which totally came in handy. But then my mother-in-law said the two words I never thought I’d hear from her lips or anyone else’s: vegan sarmale.

If you’re not familiar with Romanian food then you’re missing out. Sarmale is a cabbage wrapped meat and rice dish filled with herbs and spices. It’s similar to dolma but with a very different flavor profile. But my mama in law made them vegan, using mushrooms instead of meat and with Mămăligă on the side. For the uninitiated, Mămăligă is polenta. Delicious, hearty polenta. And it was so tasty I didn’t even think twice about eating it before photographing it so you’ll have to take my word for it.

And instead enjoy the photo of vegan borscht with potatoes and yep, you guessed it…more Mămăligă!

I ate two bowls of it…as did my hubs and we ate nearly ALL of the Mămăligă! The highlight was the fresh dill, which somehow transformed the dish into something hearty and delicious and the perfect respite from a day of unpacking and setting up.