Once in awhile a recipe will make the rounds on the web and I’ll think to myself, “I can veganize it.” Sometimes it’s just me being confident because I’ve spent a lot of time over the years tweaking recipes and some of it is an insane level of hubris. But if you want to keep your palate satisfied and always guessing, it helps to experiment. Try new spices and blends to see what you come up with, you might be pleasantly surprised.

Shakshuka is typically a dish made with eggs but since we’re vegan or plant based around these parts, I had to figure out who would become the star of this show. I could have gone the easy route and went for vegan scrambled eggs but that felt like cheating and it also didn’t match what was brewing in my head. Mushrooms could have worked but I wanted my first vegan shakshuka to be a day meal (like lunch) and I didn’t want to spend a thousand minutes cooking a few hundred grams of crimini mushrooms.

Then it hit me. Beans. There are plenty of types of beans and the trick is choosing the right ones. I wanted to use butter beans but because our theme this week is beans (more on that later) and the hubs had already taken them, I went with cannellini beans, also known as navy beans. 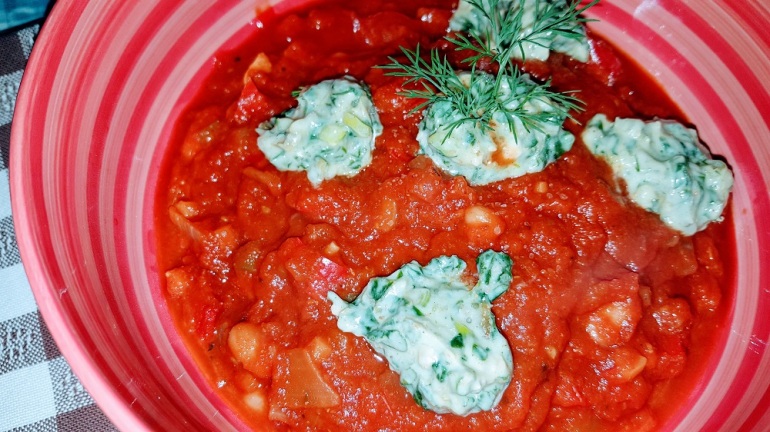 The key to a good shakshuka, at least according to the internet and Alton Brown is the thick tomato and chili sauce. Most of the time I would give some fresh tomatoes a boil to remove the skin and use those, but again this was a lunch dish and I wanted to get some work in, so I grabbed a jar of fire roasted crushed tomatoes and mixed them with fresh plum tomatoes. That way you get the sweetness of the jarred stuff to offset the peppers and the tartness of the fresh ones for more depth of flavor.

For peppers, my advice is to know your taste buds. If you can handle spice, go with a hotter chili or use bell peppers like I did and add in a diced jalapeno or serrano chili pepper. Since my hubs isn’t a fan of spice, I compromise by keeping the seeds out of one side and minimizing them on the other. You can always add more spice later.

So we have tomatoes and chilis. Next we need onions and garlic. 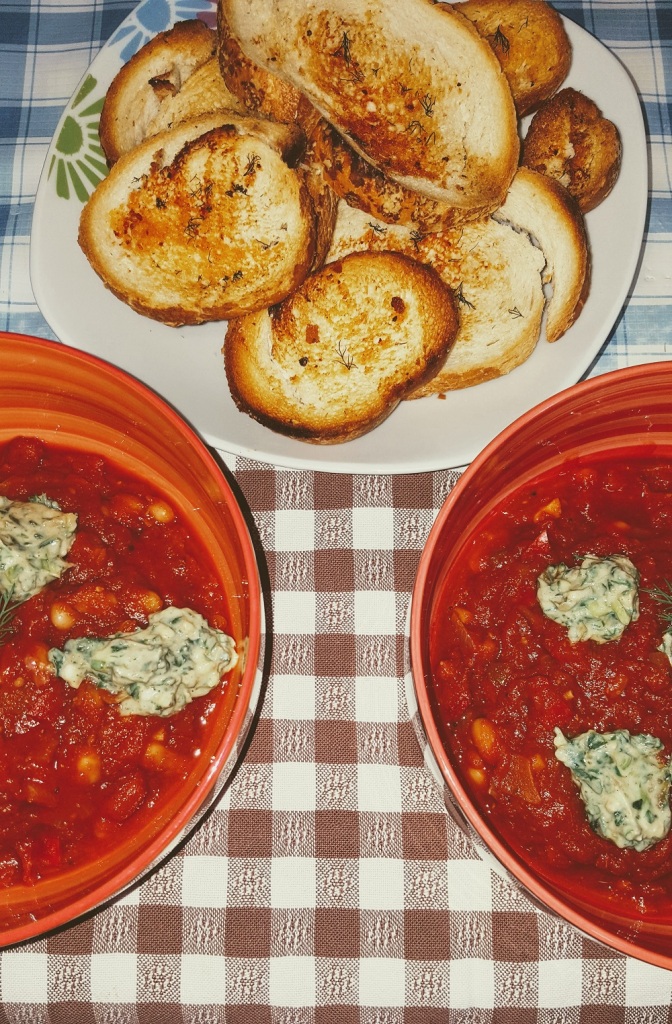 You want to get the onions, garlic and peppers sauteed in a small amount of oil (or none of you choose) before adding the tomatoes. I added the fresh tomatoes first, giving them time to cook. Toss in some fresh rosemary and oregano.

Then add crushed tomatoes, and booze if you choose, then let the sauce simmer until it is nice and thick, 15 to 30 minutes.

Toss in the white beans and simmer a little longer, and if you’re craving some extra vitamin K, toss in a handful of spinach. 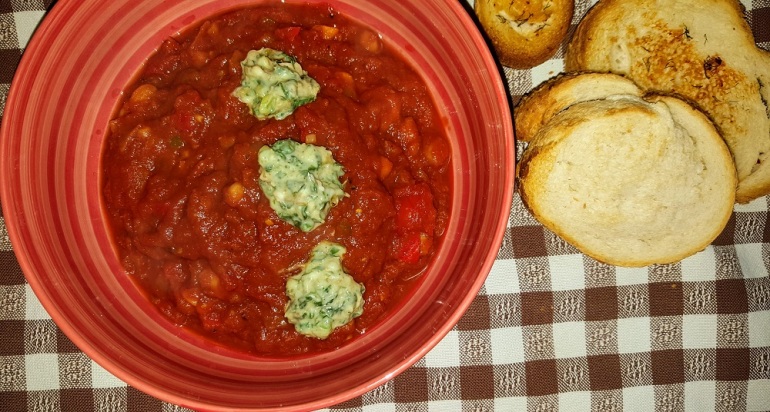 And because I saw it in a photo and thought it looked tasty, I added a few dollops of pesto cream, made with Violife “cream cheese” which by the way is very delicious with a clean flavor. Take some leftover pesto and add a tablespoon or two of cream, dropping it on top of your vegan shakshuka.

Toast the bread, using olive oil, salt & pepper, and chili flakes. Bake for 3 to 5 minutes or until crispy and then satisfy your appetite.

After a long day of shopping and people-ing, this meal and an ice cold beer was just what I needed to recover.