I won’t pretend that I am the pinnacle of good health, but I do try my best to only feed my body good things these days. I quit smoking almost a decade ago (yay me!) and I’ve lost about fifty pounds but I still indulge in alcohol because it tastes yummy and I love it. But what I do is stay away from processed foods that I used to love like salami, bacon and even my beloved prosciutto. Then I began to feel sluggish after a juicy steak so when I was in the States I satisfied my beef craving with bison.

Here in Germany however Bison isn’t so easy to come by…do they even have bison floating around here? I haven’t had beef in a couple of years, since I visited my steak-loving papa and even then I got a delicious cut of bison at Ted’s Montana Grill (everyone check it out if you have one near you). But the thing is beef just doesn’t taste like it did back in the day when I was a kid, but that doesn’t mean that I don’t still have burger cravings. I am a red-blooded American, after all.

END_OF_DOCUMENT_TOKEN_TO_BE_REPLACED 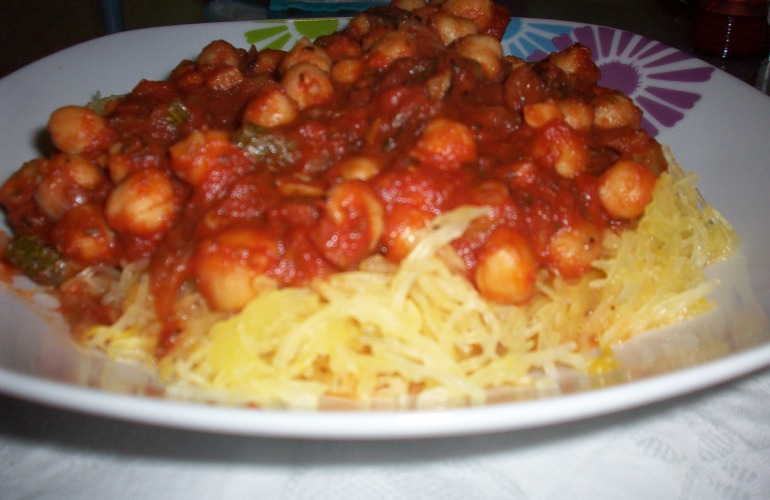 In my quest to learn about new things or just to try foods I’ve never eaten, I recently stumbled upon spaghetti squash. I’d heard of it but I really hadn’t seen it up close before. So last week I spotted it at the grocery store and targeted it as my next culinary feat. I went online and did my homework to see what it looked like on the inside (self-explanatory) and how to cook it. Satisfied with my research I had the perfect idea that was both simple and brilliant: spaghetti-less spaghetti! 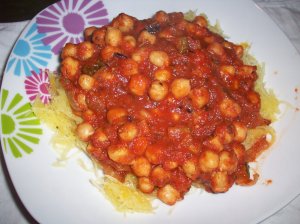 Since it looked so much light spaghetti and by all accounts has a pretty mild flavor I figured this was an easy way to introduce my taste buds to the natural wonder that is spaghetti squash.

Since it would take some time to cook the spaghetti I decided to skip time with a traditional protein and opted to use chickpeas in my sauce. Years ago when I tried hummus for the first time, I fell in love with chickpeas. Then I had falafels and that love was solidified. Chickpeas, also known as garbanzo beans, have a really unique and earthy flavor. I love’em so much that sometimes I rinse and dry them, pop them in the oven with some spices and eat them like beer nuts!

So yeah, chickpeas served as our main protein for this meal and I have to say I was more than pleased with the results. Then, there was the entertainment value of serving it to my husband without telling him what it was other than “spaghetti”. His response was classic, “it doesn’t taste like spaghetti, what is it?” Turns out he loved it though so now I just have to find more ways to use it because when autumn comes in Germany it is a veritable feast of squash! 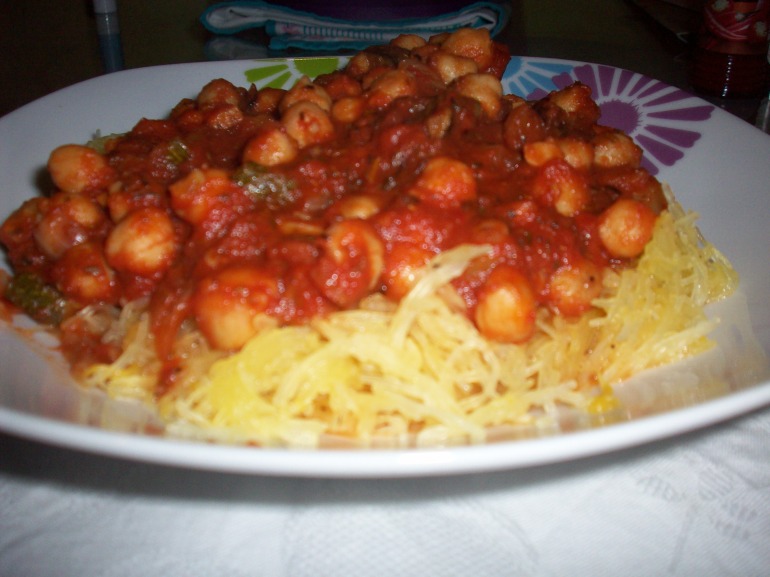 I wouldn’t say that I lead a sheltered life as a young child but I was a fully grown adult before I had the luxury of eating soup from a bowl made out of bread. I was living in Boston back in 2004 and working hard for John Kerry and sharing a huge coastal house with a bunch of college grads. We decided to go to New Hampshire to look around and check out the ‘Live Free or Die’ state. After indulging the guys in endless hours and thousands of bullets at a gun range we were in search of nourishment.

Since none of us were from the Northeast we were all New Hampshire virgins but we stopped at this really great seafood restaurant on the water. In addition to having some of the bluest water I’d ever seen at the time, this place made a killer lobster bisque in a delicious sourdough bread bowl. Maybe it was the booze, or maybe it was the MJ but I ate nearly every inch of that bowl except the über soggy bottom section.

END_OF_DOCUMENT_TOKEN_TO_BE_REPLACED

I am not one of those people who hate salad. Whether it is the lettuce and dressing variety or the pasta variety, I love a good salad. In fact I am such a salad lover that I don’t need lettuce or pasta, and often I forego both when I’m feeling adventurous or simply tired of them.

I don’t look at a bowl of arugula and tomatoes and see some restrictive diet food…unless of course you try to feed me iceberg lettuce. Contrary to what some of my dear friends believe, iceberg lettuce is crap. Sure it has almost no calories, but it also has almost no nutrients and if I’m gonna nosh on salad then I’d like some nutrients to go with my leafy greens.

END_OF_DOCUMENT_TOKEN_TO_BE_REPLACED

Lately I have had a major hankering for crab cakes. Not fake surimi cakes but honest to goodness crispy crab cakes with little bits of color and that tang of Old Bay seasoning. Unfortunately finding crab—at a reasonable price—around these parts is about as easy as finding Unicorn meat so I had to improvise.

At first I was hopeful I could find canned crabmeat, but alas in Germany most of their canned seafood does not fit the bill. Canned tuna, while not awful, tends to dry out a lot as I learned years ago in a failed attempt to sate a crab cake craving. The rest of this aisle is filled with mackerel, sardines and tuna, but packed in a variety of flavored oils. Needless to say it didn’t fit.

Plus I was sick of using beans so I decided to get some deliciously fresh zucchini. I never was a big fan of zucchini if I’m being honest but when I was about 12 years old our neighbor Rosemary made zucchini pie. And I was thinking “yuck” until I slid a piece off the fork and I decided it was some of the best pie I’d ever eaten. Of course Rosemary made a superb crust that was the perfect blend of flaky and buttery, but the cinnamon, nutmeg and what I later learned was cardamom made zucchini pie taste a whole lot like apple pie.

END_OF_DOCUMENT_TOKEN_TO_BE_REPLACED

When I was younger I guess I was like most kids and teens, equating good food with, what I now know is unhealthy crap. As such whenever there was a dish that contained both beans and rice—and no meat—I looked at it as Third World food. I would turn my nose up at it and once I got my first job at White Castle I’d use my own money to buy food I found more palatable.

These days as meat makes a more infrequent appearance in my meals, not to mention time spent in Louisiana and Los Angeles, I’ve learned to appreciate the subtle nuances of rice and bean dishes. Whether it’s dirty rice or Mexican style rice & beans I’ve discovered how delicious and healthy beans can be.

END_OF_DOCUMENT_TOKEN_TO_BE_REPLACED

One of my favorite things to do for my husband is to take traditionally meat-based meals and turn them vegetarian for him. Of course it’s for me too, but if left to my own devices I’d probably chop up some filet and make old school beef stroganoff.

One day in the market I passed by some delicious looking egg noodles and immediately I was transported back to my granny and her tasty thick stroganoff gravy. I always enjoyed the gravy with mushrooms and onions, but honestly my granny (both of them) tend to make their beef a little well done, which sucks when you have to reach inside a gravy-filled mouth to pull out meat stuck between your teeth. Even thinking back to the last time I made it with meat, I think I made the meat too tough as well so I was pretty excited to try something new.

END_OF_DOCUMENT_TOKEN_TO_BE_REPLACED

In my recently rediscovered love of all things whole fish I decided to give sardines a try. I mean, I’ve had sardines before but usually of the canned and packed in oil variety, but I’ve never had the actual fish in all its bony glory. So when I spotted these babies in the frozen section—not fresh but since I’ve no experience with them I figured it was good enough—I snatched’em right up.

END_OF_DOCUMENT_TOKEN_TO_BE_REPLACED

I’ll admit that my days of watching football or basketball are far, far behind me. And honestly when I’m in the throes of a tennis match the only thing in my hand is a cocktail. But since everyone around me is a soccer (or football) fanatic, sometimes it’s important to have a few game day recipes to tide the hungry mouths over. Just between you and me, these recipes are more to keep the screaming at the television to a minimum.

Since it’s a poorly kept secret just how much I love potatoes I usually take any opportunity I can to whip them up in any form. For the recent German on German soccer match I decided to go with good old-fashioned potato skins.

END_OF_DOCUMENT_TOKEN_TO_BE_REPLACED

So I’m back marooned on my island with Brad Pitt in tattered clothes, near nude, and we have exhausted our potato supply. What to do? Get the next best thing, of course, noodles!

Ok so I don’t love noodles as much as I love potatoes but man do I love a good noodle. Whether it’s a buckwheat soba, Asian ramen, whole wheat spaghetti or a simple egg noodle…I will eat it with gusto!

Despite this recipe today, I’m not one of those pasta lovers who can’t go without sauce. Sure I love Alfredo, Bolognese, ratatouille or plain old tomato sauce, but I love a nice lemon and olive oil as much. In fact I absolutely adore a nice scampi—with or without shrimp but ALWAYS with anchovies. YUM!